This used to be a railroad engineering factory.
These factories - called "Ausbesserungswerke" (repair works) by the "Reichsbahn" (the German State Railraod from 1920-1945) - were placed all over Germany and mainly used to conduct large repairs, general inspections and the workup of exchange parts.
Besides that, trains were refit, modernized, and sometimes even built here.

I have no exact idea as to when this factory was built, but it must have been sometime early in the 1930s, because the administration building was fitted with an air-raid basement, so it's pretty safe to assume that it was built sometime around the Nazi's rise to power.
The keys in the photos are for the basement; the engraving in the key tag says "Luftschutzkeller Verwaltung" ("Air-Raid Basement Administration").
In these particular engineering works, steam locomotives and box cars were overhauled, repaired, refitted or even built.
After exploring the administration building we went into the largest of the factory halls, which is also the one with the least damages. Parts of the other buildings have already collapsed as you'll see in the next posts, so stay tuned!
The large factory hall measures about 175 meters in length and 65 meters across, so it's pretty huge.

The second aministrative building we entered was really something. Great colors and really nice natural decay, the paint coming off the walls, the wooden boards creaking under our feet and the morning sun shining a light through the broken windows... 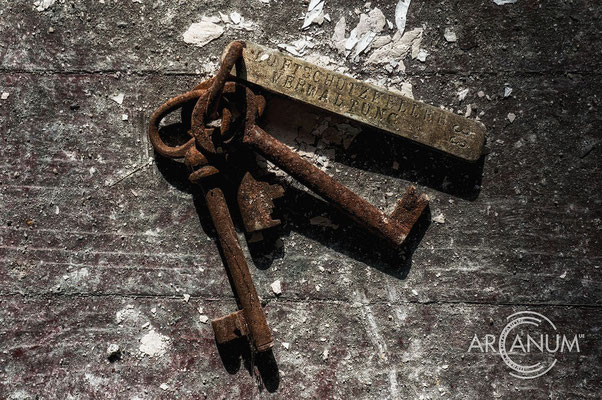