Exploring the Rotten Side of Germany

You might say I'm a collector. I collect rare objects. Facts, stories...I travel the roads of Germany seeking its heart.

“Truth is the most precious thing. That's why we should ration it.”

The former "Sophia Sanctuary for Consumptives" in München is a former lung sanatorium in Thuringia.

The idyllic forest building was built in 1898 and has been abandoned since 1994.

The clinic was founded on October 14, 1898 with the support of the Grand Ducal Family of Saxony-Weimar-Eisenach in a forest area above the town of München, today a district of another town.

It was named after Princess Sophie of the Netherlands, who had died shortly before.

The house initially served as a spa facility for the treatment of tuberculosis patients...(more)

This abandoned "castle" is situated in an area which was a wealthy health resort in the late 19th century. It was originally built in the 1880s as a recreation home on a wooded hill on the outskirts of the city, and it offered the sick a temporary home for their spa stay.

Later in the century, the owner and a well-known doctor worked together and turned the recreation home into a tuberculosis sanatorium.....(more)

The rain hadn't stopped during our drive away from our first location to our second location that day. We had opted for an abandoned sanatorium that wasn't too far away and where we'd identified a nice place to park without having to walk too much ;)

We parked the car and walked through the rain to the address of the sanatorium.

We were a bit disappointed by the building - it looked like a typical building from the late 1960s or early 1970s - nothing like the old sanatoriums that we'd visited in the past.

Entering was easy; there was an open window through which we were able to...(more) 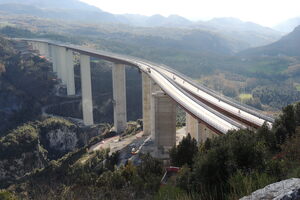 The A2 Motorway (formerly A3) is the main road connecting Calabria to the rest of the Italian peninsula. It passes through rough terrain, among mountains and valleys, that always made it difficult to connect the region to other parts of the country. One of the main works that form part of the motorway is the Italia Viaduct (Viadotto Italia) that crosses the Lao River Gorge in Northern Calabria, between the towns of Laino Borgo and Laino Castello. The bridge was constructed between 1966 and 1969, it rests on 19 concrete pylons and it has an overall length of 0.72 miles (1.16 kilometers). At the time of construction, it was the highest bridge (in terms of the distance between the deck and the ground below) in Europe. It was also the second-highest in the world with a height of 850 feet (260 meters) over the gorge of the Lao River below. The bridge was the highest in Europe for more than 30 years until 2004, when the Millau Viaduct in France was opened. The Italia Viaduct underwent several restorations over the course of its life, especially during the 2010s. It is still the highest bridge in Italy, the second-highest in Europe, and among the 40 highest bridges in the world.
>> Read More