They were immensely successful, so they were soon called "The Wood-Kings from River Spree". All necessary facilities had been built right there on the premises - coal storage, steam plant, sawmill, water tanks, and administration buildings.

The factory was sold to a new owner in the beginning of the 1930s. New veneer machines were acquired and new cranes were set up on the storage sites in 1937.

In 1941, the factory was included in the war production plan, so the veneer production was seized and production of ammunition cases made from saw wood started.

The factory sustained heavy damages through various bombings during World War II. Despite the damages, work started again in 1946 to prduce saw wood from oaks, beech wood and pines for the production of clothes hangers, barrels, boxes and lasts.

The operation was seized by the East German state and became a "people's owned enterprise" (VEB). New production and storage facilites were built, and despite shortage of wood, in 1952 the production of chipboards began.

In December of 1991, the factory was shut down.

I had visited this place before, but I had never found a way in. When we finally had found one during our last attempt, after about 15 minutes, two guys from a security firm started following us until we had left the premises again... 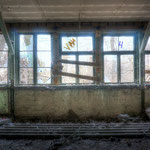 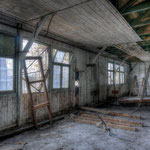 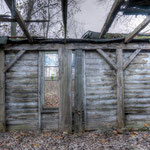 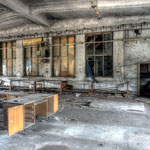 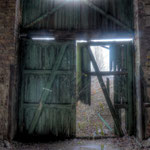